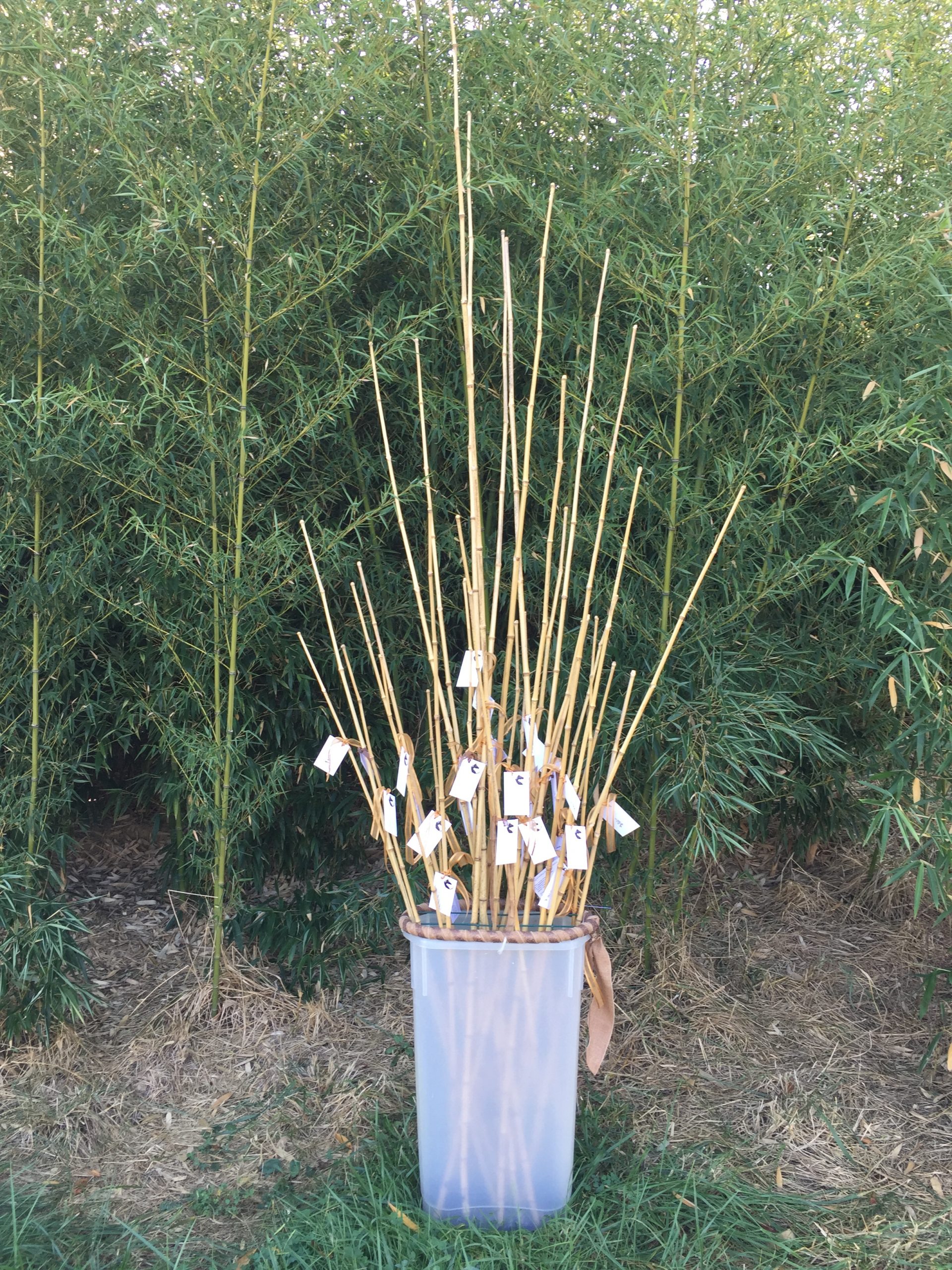 Whips are available in a variety of sizes. However, not all sizes may be in stock at any time. Before placing an order for a whip contact Hela Russell to find out if the length you want is available. Then return here to order it.

Among the many things Mark Russell

learned from Master Nuno Oliveira was that to honor the horse as a natural being, any equipment utilized should be as close to nature as possible so as to extend that spirit to our interactions with horses. At the time, Mark became familiar with using branches from apple trees and bamboo canes as extensions of our bodies to help direct our horses.

Twelve years ago Mark and I had some bamboo plants shipped to us as we had decided we wanted to have the peace of a grove to escape to. Those that know bamboo know the saying “The first year it sleeps, the next year it creeps, then the third year it leaps”. It actually takes quite a bit longer than that! On the sixth year Mark collected a cane, cleaned it up, smoothed it, conditioned it, and brought it to his covered arena.

Since then, we have together been producing whips for ourselves and for some of Mark’s students and friends. Over time our first spindly little grove has flourished and we now have two more groves coming along, and now are able to produce more whips.

We have learned so much since then. Most canes we use to make whips are at least three years old. They are initially grove – cured then set aside for several months – sometimes almost a year – until they are dry, straight**, and without cracks. They are then cut to length according to each cane’s intrinsic nature and balance. The next step requires cutting off what remains of the branches, smoothing out the nodes and the ends. They get washed and then are conditioned with natural plant based fats. I like to add a little myrrh as the fragrance makes me smile. And finally done.

By carefully curing and finishing the bamboo in this way each whip has its life and energy preserved. They continue to breathe as there has been no cell destruction. Just like wood, the moisture content of bamboo adjusts to the ambient environment unless destroyed by too much heat or chemical preservatives.

CARING FOR YOUR BAMBOO WHIP

Generally speaking you want to protect your bamboo the same way you would treat any plastic/carbon fiber whip from mechanical damage. Do not leave it on the ground where it can be stepped on, obviously never hit your horse (or anyone) with it.

The bamboo will last for years even if left outside under some kind of cover. As the bamboo’s moisture content adjusts to its environment you would want to keep it away from dry heat sources such as a fireplace or a very dry home as it can crack. These cracks are usually harmless however if they become very wide can change the energy and feel of the whip. A tack room is ideal storage for your whip.

We condition our whips with plant based fats; a favorite is coco butter, we have also used shea butter with success. Adding a little beeswax (melted) can also be useful. Olive oil, coconut oil, anything in your kitchen should suffice if that is all you have. There is no absolute need for conditioning – our oldest bamboo whip in use is about six years old and we have never conditioned it. So, an optional step.

A NOTE ON GARDEN CENTER BAMBOO

Bamboo can be found at garden centers or home improvement centers. These are high heat treated with chemicals to intentionally stop them from breathing and to help preserve them while in-ground. They are hard, feel very different in your hands, and have no life. The better choice than this is to continue to utilize your plastic/carbon fiber whip. Of course, the best choice is to use one of Mark Russell’s and to honor the nature of the horse.

** Just like everything in nature, the bamboo whip will never be perfectly straight. The patterns of growth in each cane can contribute to slight variations in ‘straightness’ as it cures. Mark always preferred some variability as the whip conformed more readily to his hands.